WHAT ARE THE OUTSTANDING BRANDS OF MIDDLE - CLASS COFFEE - SHOP SEGMENT IN VIETNAMESE MARKET? 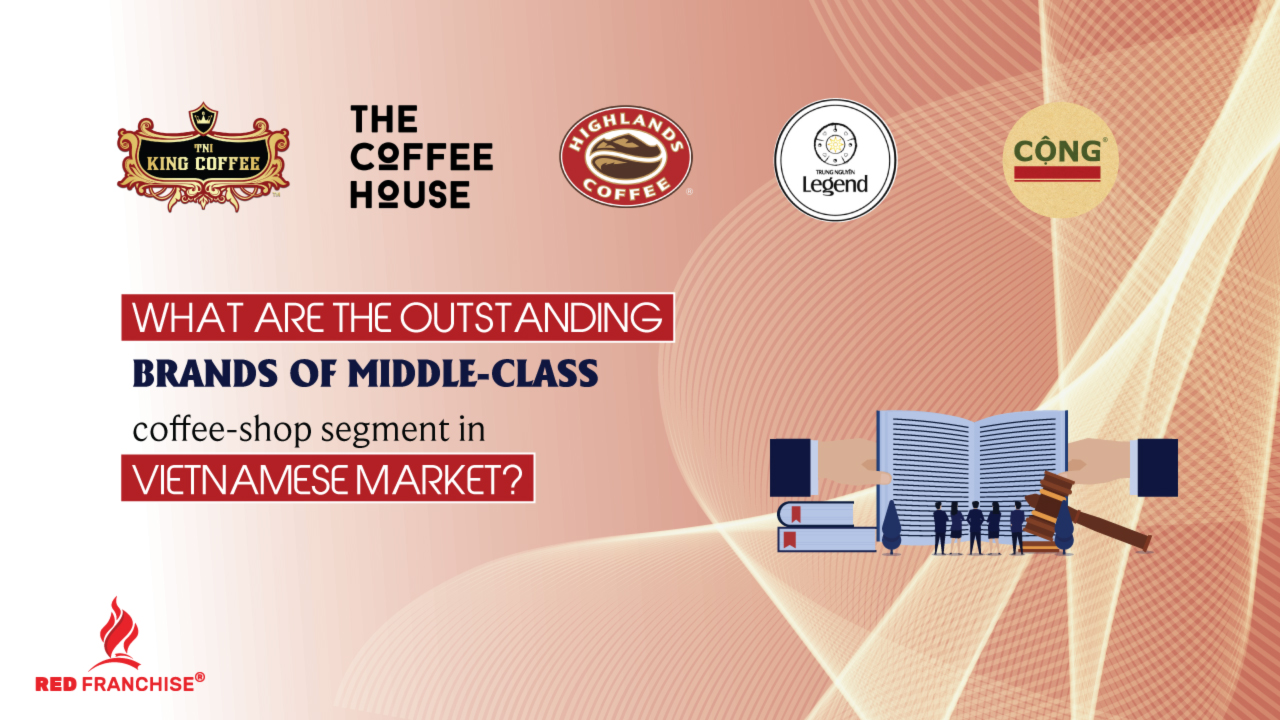 The coffee-shop market in recent years has been so dynamic. And the brand's replacement in this market is changing continuously now. In the battle for market share, many brands have had the compassion to jump out of the game while the others are being eager to jump in it now. In particular, in the middle-class coffee-shop market that so much change is happening, let’s find out what are big brands being in the middle-class coffee-shop segment and level of shop coverage they are.

By September 2019, the Highlands Coffee brand that is owned by Viet-Thai International Group known in the $25 million M&A deal with Jollibee, has had more than 300 shops throughout 22 provinces and cities of Vietnam. Most of them are located in Ho Chi Minh city with over 110 shops, Ha Noi with over 80 shops. The rest are more than 100 shops placed in 20 provinces nationwide.

Highland’s featured products are coffee and freeze (matcha) that cost from VND 29.000 – 65.000 per cup depending on type and size. The majority of Highland’s shops have expanded by itself, and there are very few franchise ones. The total expense of Highland’s one franchising shop is about more VND 4 billion that depending on location.

Focusing on self-development without doing franchise outside, The Coffee House has had more than 148 shops located in 16 provinces and cities throughout the country by September 2019. In Ho Chi Minh city, this system has a total of 85 shops majorly located in the suburban districts. In Ha Noi, it has 29 shops in 11 districts, mostly in the outskirts. The prices of The Coffee House’s products are about from VND 29.000 – 65.000 per cup.

Trung Nguyen Legend Café chain owned by Mr. Dang Le Nguyen Vu now has 66 shops located in 10 provinces and cities throughout the country. Until now this chain has 44 in Ho Chi Minh city, 8 in Ha Noi, the remaining shops are 14 placed in other 8 provinces and cities. The remarkable product features of Trung Nguyen Legend Café are customers enjoyed quality coffee cups in the traditional filter coffee. Especially, this brand promotes its sale of packaged coffee products more than other brands. The leader product of this system is coffee with the prices from VND 36.000 – 150.000 per cup. The total expense of one Trung Nguyen Legend shop is VND 3,5 billion or more depending on the region.

Cong Ca Phe imprinted strongly by the culture of North Vietnam that has a completely different style from The Coffee House’s Korean copycat style. Now, this chain has 60 shops located in 13 provinces and city nationwide, 32 of which in Ha Noi, 14 in Ho Chi Minh, the rest in the northern provinces and cities. Cong Ca Phe’s featured product is coconut coffee. The size-based prices of this chain are from VND 30.000 – 45.000 per cup. Although Cong Ca Phe has done franchise outside, it mainly still develops its chain by itself. The total region-based franchise fee of Cong Ca Phe is about VND 2 billion.

Mrs. Le Hoang Diep Thao’s King Coffee now has 38 shops in 10 provinces and cities throughout the country, 22 in Ho Chi Minh, 3 in Ha Noi, and 13 in other places. While other coffee-shop models focus on building nationally before expanding internationally, King Cofee is different from them when building its brand in the overseas market and developed in Vietnam back then. The unique point of King Coffee is that having so many kinds of famous coffee from both domestic and foreign regions for customers to select.  The coffee prices are from VND 32.000 – 155.000 per cup. Until now, King Coffee has done its franchise system but it still has not been boosted strongly yet.